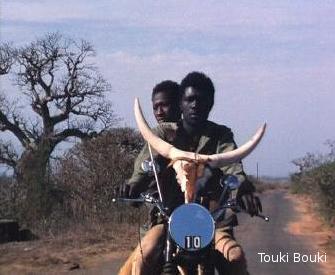 Africa in Motion (AiM) will enchant audiences with screenings of more than two dozen African films from all over the continent at Filmhouse Cinema this October. The packed programme covers a variety of genres spanning six decades of filmmaking in Africa. AiM is an exciting first for Edinburgh. Never before have so many African films been screened in one festival.

The inaugural AiM festival presents a "best of" introduction to African cinema since African films are consistently under-represented and marginalised in distribution and exhibition world-wide. The extensive programme includes some of the most significant African classics, unearths a number of "lost classics", as well as showcases contemporary groundbreaking films.

AiM gives Scottish audiences unprecedented access to artistic representations of the complexities and diversities of African cultures through the eyes of Africa's best directors.

Throughout the festival African musicians, poets and artists will perform and exhibit their work in the Filmhouse café. Books, art work and CDs will be on display and for sale in the Filmhouse foyer.

Most screenings will be introduced by high-profile theorists and critics of African film. The festival also includes an excellent complementary programme of free talks and discussions, offering opportunities to the general public, school children and students to engage in discussions on African cinema. Topics include issues of film aesthetics and themes relating to African cultures, histories and traditions addressed in the films.

"Africa in Motion is, quite simply, one of the best programmes of films ever to be shown in Scotland. At a time when mainstream American cinema is underperforming and undernourishing, and when so much film programming seems stuck in a loop, repeating the same "classics" over and over, Africa in Motion is a brilliant and long overdue window onto a world of auteurs, masterpieces, passionate polemics and gorgeous vistas. Move over Scorsese - Sembene, Ouedraogo and Mambety are the filmmakers who are belatedly exciting us." Film critic and AiM advisor Mark Cousins, Sept 06