The festival includes an excellent complementary programme of free talks and discussions, offering opportunities to the general public, school children and students to engage in discussions on African cinema.

The Centre of African Studies (CAS) at the University of Edinburgh hosts a symposium that will combine discussion of neglected strands of filmmaking from Francophone West Africa (which has been the central focus of African film criticism) with analysis of recent cinematic trends: from the emergence of women directors to the development of a dynamic and innovative body of filmmaking in countries such as Morocco, Nigeria, Ghana and South Africa. A number of leading international scholars will present their research on various strands of African cinema. The symposium will be of particular interest to students and the general public interested and involved in Film, African and Cultural Studies.

Roy Armes, Emeritus Professor of Film at Middlesex University, has published eighteen books on cinema in the past forty years and his work has been translated into fourteen languages, including Japanese, Chinese, Bengali, Hebrew and Arabic. Since the mid-1980s and the publication of Third World Filmmaking and the West, his particular concern has been African filmmaking. This has led to the publication of five books: Arab and African Filmmaking (with Dr Lizbeth Malkmus, 1991, in Arabic 2006), Dictionary of North African Filmmakers (bilingual, English & French, 1996), Omar Gatlato (1998, in French 1999), Postcolonial Images: Studies in North African Film (2005, in French 2006, forthcoming in Arabic) and African Filmmaking: North and South of the Sahara (2006). (This book will be for sale during the festival.)

Imruh Bakari is a filmmaker, writer and lecturer in Film & Media Studies, University of Winchester, UK. He is now based in Dar es Salaam, Tanzania, where he established his company Savannah Films in 2003. A graduate of the National Film & Television School, Beaconsfield, England, he was a founder/director of Ceddo, the film and video production and training organisation in London [1982-93] that played a defining role in the British independent film movement of the 1980s. He has also worked in theatre, radio and television. From 1999-2004 he was Festival Director of ZIFF Festival of the Dhow Countries in Zanzibar, and is a founder/director of Tanzania Screenwriters Forum. His published works include: African Experiences of Cinema - co-editor [BFI, 1996], "African Cinema and the Emergent Africa" - Introduction to Symbolic Narratives - African Cinema, June Givanni - ed. [BFI, 2000]. Films include: African Tales - Short Film Series [Current] - Producer; Tumaini [2005] - Associate-Producer; Blue Notes and Exiled Voices [1991]; Omega Rising: Woman of Rastafari [1988] - Producer; The Mark of the Hand [1986]; Street Warriors [1985]; Burning an Illusion [1981] - Assistant Director; Riots and Rumours of Riots [1981].

Jacqueline Maingard is a Senior Lecturer and is Head of Education in the Department of Drama: Theatre, Film, Television at the University of Bristol. She is author of South African National Cinema, forthcoming in the Routledge National Cinema series. She is developing an edited volume on The Cinema of Southern Africa for the Wallflower 24 Frames series.

Noémie Mendelle, grew up in Paris and graduated in sociology from York university where she caught the film bug and became a founding member of Steel Bank Films, a Channel 4 film workshop.üĀShe is now living in Edinburgh and shares her time between running the Film & TV department at Edinburgh College of Art, Scottish Documentary Institute and producing international documentaries.

David Murphy is one of the leading experts on African cinema working in Britain today, and a Senior Lecturer and Head of French in the School of Languages, Cultures and Religions at the University of Stirling. He has published widely on African, particularly Senegalese, culture and on the relationship between Francophone and Postcolonial Studies. He is working on a long-term research project on Senegalese culture and identity from 1848 to the present, for which he has received two major research awards. He has published a very well-received book in 2000 on the leading Senegalese filmmaker Ousmane Sembene, entitled Sembene: Imagining Alternatives in Film and Fiction, and is currently co-authoring a volume entitled African Cinema: Ten Directors.

A number of leading scholars of African film - including Emeritus Professor Roy Armes, Jacqueline Maingard from the University of Bristol, David Murphy from the University of Stirling, and Imruh Bakari from the University of Winchester - will take part in a roundtable discussion facilitated by film critic Mark Cousins, debating how the significance of the 'lost African classics' could lead to a reassessment of post-colonial African cinema. The discussion promises to offer fascinating insights into the historical development of African cinematic art. A must for all interested in cinema and African culture. The Lost African Classics are screened on Sat 21 Oct at 3pm (just before the roundtable discussion), as well as on Sun 29 Oct at 1pm, please see Films.

The Lost African Classics project is funded by the Arts and Humanities Research Council (AHRC).

African Cinema Paradiso: Ten Films to Fall in Love With

African film expert David Murphy and well-known film critic Mark Cousins pick ten key scenes from the history of African film and argue why each is remarkable, aesthetically bold, and worthy of attention. Each is passionate about African film and is likely to challenge the other's choice, so sparks could fly...

Noe Mendelle, Head of Film and TV at the Edinburgh College of Art and Director of the Scottish Documentary Institute, presents an afternoon workshop on filmmaking in Angola. 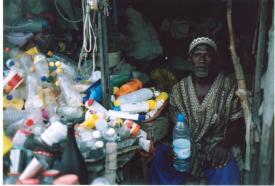 Lusophone Africa consists of 5 countries: Sao Tome & Principe, Cape Verde, Mozambique, Guinea Bissau and Angola. All are linked by their common language, Portuguese, and their struggle for independence from their colonial oppressor. If there is anything that can be called "African Cinema", it is certainly in a precarious state today due to great difficulties in finding finance for projects. However, one common goal for all African filmmakers is to see their work both as storytelling as well as making a direct contribution to the task of national reconstruction. In order to explore the difficulty in combining the two, this workshop will explore the failed attempt to make a documentary in Angola, a nation torn apart by forty years of uninterrupted war. After a thirteen-year national liberation struggle against the Portuguese colonialists ended with independence in 1975, Angola plunged immediately into a brutal civil war. The national MPLA government, backed initially by Cuba and the Soviet Union, and the UNITA rebels, supported by the US and the South African apartheid regime, remained locked in conflict until 2003, long after the end of the Cold War itself.

Africa in Motion will be conducting events for local secondary school children, facilitated by an education officer. Interested schools should contact [email protected].

Mix tells the stories of two young female Hip Hop DJs and their personal journeys in the New South Africa from different sides of apartheid divide. Created by a young director the story is told honestly and captures some aspects of current South African life very well. The DJs express their experiences and thoughts on South AfricaÆs history, crossing cultural divides, the generational gap, and the effects of political, social and cultural change on their personal lives.

The screening will be followed by an interactive workshop exploring some of the key issues raised in the film, presented by a South African Arts Education Officer.